A cooking class based on his experiences in the country of Georgia where Bennett lived, worked, and studied.

While renowned in its region for decades, Georgian food is also becoming popular in the West. The cuisine of Georgia is in many ways a cornerstone of Georgian culture, especially when served during a traditional Georgian feast (supra). Throughout the country, Georgian cooks incorporate fresh herbs and local produce, unique spice blends, and variants of the Georgian national dish khachapuri (cheese-filled bread). However, the cuisine of each region of Georgia is shaped by their different climates, histories, and influences, resulting in unique styles of cooking and flavors across the country.

In this brief course, Bennett will teach three recipes from different regions of Georgia. With the exception of one ingredient, each recipe can be easily recreated at home with ingredients that are available at most American supermarkets and with easy-to-learn techniques.

Outside his day job as a counter-terrorism researcher and graduate student, Bennett Clifford is an aficionado of Georgian cuisine. While he lived, worked, and studied the Georgian language in Georgia in Eastern Europe, Bennett learned family-style Georgian recipes from his friends, neighbors, and people he met on his travels throughout the country. As a home cook, he frequently makes Georgian food using adaptations he developed to make use of ingredients that are available in an American supermarket.

After payment is received, a confirmation will be sent with a download link. The license provided is limited to your personal use. By using the link, you agree not to share the materials.  Videos cannot be downloaded, but can be viewed as often as you like. 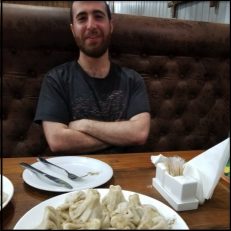