View cart “Intangible Beauty” has been added to your cart.
Carol Silverman

In the last 30 years the popularity of Balkan “Gypsy” music and dance has exploded, becoming staples at world music festivals, dance clubs, and folk dance events in Western Europe and North and South America. At the same time, thousands of Balkan Roma have emigrated westward due to deteriorating living conditions, and entrenched stereotypes of criminality have arisen amidst deportations and harassment.

In this heightened atmosphere of xenophobia, Roma, as Europe’s largest minority and its quintessential “other,” face the paradox that they are revered for their music and dance yet reviled as people. Balkan Romani music and dance are simultaneously professions, commodities, symbols of identity, and tools of multiculturalism in heritage discourse. Focusing on communities, clubs, and festivals in Europe as well as the US, this illustrated ethnographic presentation investigates the ramifications of these phenomena for Romani performers and non-Romani musicians and dancers, producers, audiences, and marketers.

Carol Silverman has been involved with Balkan and Romani culture for over forty years as a researcher, teacher, performer, and activist. An award-winning Professor Emerita of cultural anthropology and folklore at the University of Oregon, she has published numerous articles about Balkan music, festivals, gender, cultural policy, appropriation, and human rights issues among Roma. She is curator of Balkan Music for the international digital RomArchive, and board member of Voice of Roma.

Her 2012 book Romani Routes: Cultural Politics and Balkan Music in Diaspora won the Book Prize from the Society for Ethnomusicology, and her 2021 book Ivo Papazov’s Balkanology traces the history of Bulgarian wedding music.

Carol performed, recorded, and toured internationally for 20 years with the Yuri Yunakov Ensemble. She teaches Balkan singing internationally and has given dozens of concerts, workshops, and lecture/demonstrations on Balkan folk music in its cultural context.

After payment is received, a confirmation will be sent with a Vimeo link to access the video. The license provided is limited to your personal use. By using the link, you agree not to share the materials.  Videos cannot be downloaded, but can be viewed as often as you like. 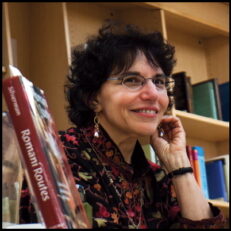 You're viewing: Balkan Romani Music and Dance $5.00
Add to cart