About the Program
The Balkans are defined physically and culturally as the area of southeastern Europe that was part of the Eastern Roman (Byzantine) and, later, the Ottoman Empires. Although today we find numerous ethnicities residing there, there are far more commonalities among the populace than differences.

Ron Wixman has spent nearly 55 years studying the cultures, dances, costumes, and customs of the various peoples of this area. In this presentation, Ron shares insights about village life and the contrasts between the traditional and contemporary cultures of girls/women and of boys/men, including everyday issues of work, family, folk religion, and ordinary daily life.

Of great interest is that the transition from boyhood to manhood is not anywhere near as great as the passages for women from girlhood to married/childbearing to menopausal; while many traditional men’s activities have been replaced by modern machinery and technologies, that is not at all the case for women.

A folk dancer for most of his life, Ron Wixman has performed with ethnic ensembles, taught at folk dance festivals and camps in North America, taught in the Russian & East European Studies program at the University of Oregon, and lectured on Smithsonian Institution trips. A prolific writer, his research focuses on geographies of ethnicity, culture, and religion, particularly those situations related to political geographical questions, ethno-territorialism, and ethno-territorial disputes. 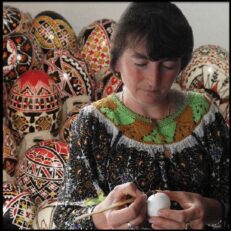