Sing-Along with Matt and Joan Shear

About the Presentation
You are invited to take advantage of this opportunity for “home delivery” of the group sing-along event Matt and Joan have led at parties going back to 2008, when they first brought their songbooks to Pinewoods Camp and elsewhere. Normally guided by requests in real time, for this SOFA event they instead create a playlist drawn from perennial group favorites over the years.

Enjoy an eclectic mix of genres, with songs chosen to be as well-known and user-friendly as possible. Lyrics will be provided, but not sheet music. Matt says, “We encourage you to put aside any self-consciousness you may have and sing along with our melody or harmony – or add your own!”

About Matt and Joan
Matt first took up guitar when he was nine years old and has been singing his favorite songs ever since. Through performing with a number of groups over the years he has gradually expanded his repertoire well beyond the 60s folk and rock music he started with.

Joan began singing publicly at church social events with Matt, and in 2010 was recruited by a local women’s a cappella group (now defunct).

They have been singing together at home ever since, as well as with Boston-based Croatian tamburitza band and chorus Pajdaši, which has performed at Zlatne Uste Golden Festival in New York City and in Croatia. Recently Matt and Joan have enjoyed working out their own two-part harmony arrangements of favorite songs, and have been known to occasionally take their growing repertoire of out of the house to perform together at local open mic events.

After payment is received, a confirmation will be sent with a Vimeo link. The license provided is limited to your personal use. By using the link, you agree not to share the materials.  Videos cannot be downloaded, but can be viewed as often as you like. 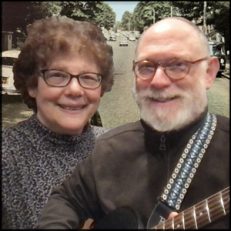