From Petroglyphs to Pottery: Conversations Across Millenia

From Petroglyphs to Pottery: Conversations Across Millenia with Ann Schunior

About the Presentation
Animals are a source of sustenance and awe. They are domesticated and feared, symbolic and totemic. Ancient peoples depicted animals on their pottery and rock art, allowing us to have conversations that span time and geography. Ann takes us on a tour of petroglyphs around the world and then shows how she interprets them on her pottery. The images used in Ann’s pottery are mostly drawn from petroglyphs in Central Asia and Africa.

Not all rock art is prehistoric. While Ann discusses ancient rock carvings, she also talks more broadly about rock art, taking a rather expansive view that includes contemporary graffiti and paintings that grace abandoned rock quarries in the Boston area.

About Ann
Ann Schunior had no particular interest in pottery until, in 1966, she visited Seagrove NC, the home of Jugtown Pottery and generations of country potters. Seeing the growth of a pot from a lump of clay to a large urn sparked her imagination, and a few years later in Boston, she decided to take a pottery course. Her hands haven’t been free of clay since!

Ann says, “My work is inspired by traditional crafts around the world. My pottery forms come from the unfailing shapes of simple functional ware, but the surface designs come from animal imagery on petroglyphs, wood carvings, and fabric paintings of Native American and African cultures. I have traveled widely, primarily in West Africa, to meet craftspeople that still work in the old ways. I am as excited by indigenous architecture, weaving, and fabric dyeing as by traditional pottery. I try to incorporate the imagery from traditional media onto clay without losing [its] original vitality.”

After payment is received, a confirmation email will be sent with a download link. The license provided is limited to your personal use. By using the link, you agree not to share the materials.  Videos cannot be downloaded, but can be viewed as often as you like. 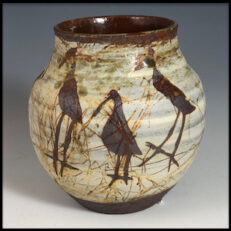 You're viewing: From Petroglyphs to Pottery: Conversations Across Millenia $5.00
Add to cart